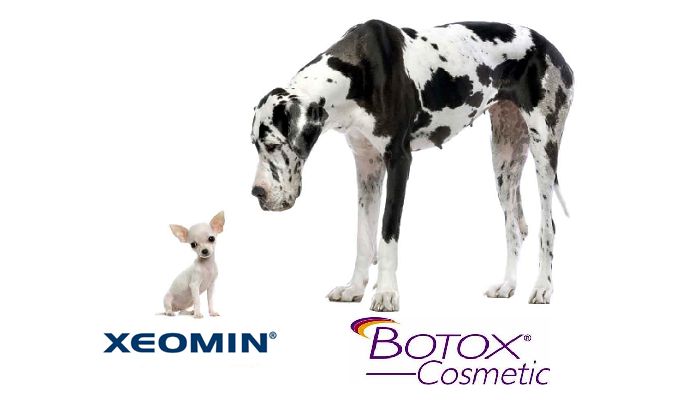 Botox vs. Xeomin -by Dr. Tomasello

Xeomin (Zee-Oh-Min) from Merz Aesthetics has been used in Europe since 2008. It received FDA approval in November of 2011 and is the newest Neurotoxin on the US market. However, Xeomin (inco-botulinumtoxinA) did not come out of the gate smoothly. It was pulled in March of 2012 following a federal court ruling that Merz collected consumer lists and sales figures from Allergan (the maker of Botox). The confidential information was obtainedthrough Allergan sales representatives. So after a rocky start, it was re-launchedin early 2013. Botox and Xeomin are very similar. Xeomin is sometimes described as The Naked Botox due to its absence of the carrier proteinspresent withBotox. In theory this absence of protein carriersresults in fewer allergic reactions or resistance to the neurotoxin. Xeomin, due to its lack of these additives, does not need to be refrigerated. It is the only one of the three neurotoxins that has this feature.

Botox and Xeomin are essentially identical in terms of the active neurotoxin ingredient. One unit ofBotox = One unit of Xeomin. (One unit of Botox = 2.5 Units of Dysport). Thus the conversion is simple. If you had a good result on your brow with 20 units of Botox, you should get the same result with 20 units of Xeomin (or 50 units of Dysport). Dysport clearly has a faster onset of action than Botox. (1-3 days vs. 3-5 days on average). Xeomins 3-5 day onset of action mirrors Botox.There are case reports claiming Xeomin works faster, however I have been unable to locate literature supporting this. Certainly ifsuch astudy existed,Merz Aestheticswould have let us know. Equally common are reports of Xeomin being cheaper because it doesnt last as long. There is no study supporting this either. Xeomin and Botox both last 3-6 months. Results vary person to person and are affected by factors such as activity level, amount injected and area injected.

Xeomin may cost the doctor less than Botox depending on how much they are buying (up to 15% less). Whether or not they pass the savings along to you depends on each individual practice. Many offices, to simplify matters, charge the same per unit price for Botox and Xeomin. Based on the practices I reviewed, the average for Botox is $12-$14/unit and Xeomin $9-12/unit.Overall the average savings is $1-2 less per unit of Xeomin (vs Botox). Merz Aesthetics has offered different promotions in the past, such as a $50 gift card when 30 units or more of Xeomin were purchased. Having three products instead of one is good for consumers as each companyis vying foryour business and your loyalty. Through rebates, gift cards and award programs, many discounts are available as each companywants you using their product and are willing to reward you for doing so.

Products like Coca-Cola, Heinz, Kleenex, Viagra, and Botoxhave had great success along with names that bring forth a clearimage to consumers. They are known and trusted brands. There are other colas, catsups, tissues, erectile dysfunction medications and neurotoxins, butif someone says Botox, the vast majority of the population knows what you are talking about. Its the gold standard; the tried and true neurotoxin used a long time while giving predictable results. Dysport was called The new Botox and Xeomin has been called The naked Botox. Even competitors of Botox are described in Botox terms. Botox is a strong, enduring and trusted brand.

The most tangible benefits to recommend Xeomin are firstly, its slightly lower cost (in some offices), and secondly, the fact that it does not need to be refrigerated. The theories that it will cause less resistance or allergies are not likely to make one shred of difference in the success or failure of Xeomin. As it stands in 2015, Botox is to medical aesthetics as CocaCola is to soft drinks. Time will tell how Xeomin will fit in as a player in the neurotoxin market. The fact that it really does NOT have a glaring downside is important. I certainly feel it is an effective and worthy neurotoxin to use as an alternative to Botox or Dysport. There are plenty of positives with Xeomin. Similarly, there was much to recommend the soft drink Slice until Sierra Mist came along. Be Well, Dean M. Tomasello, MD